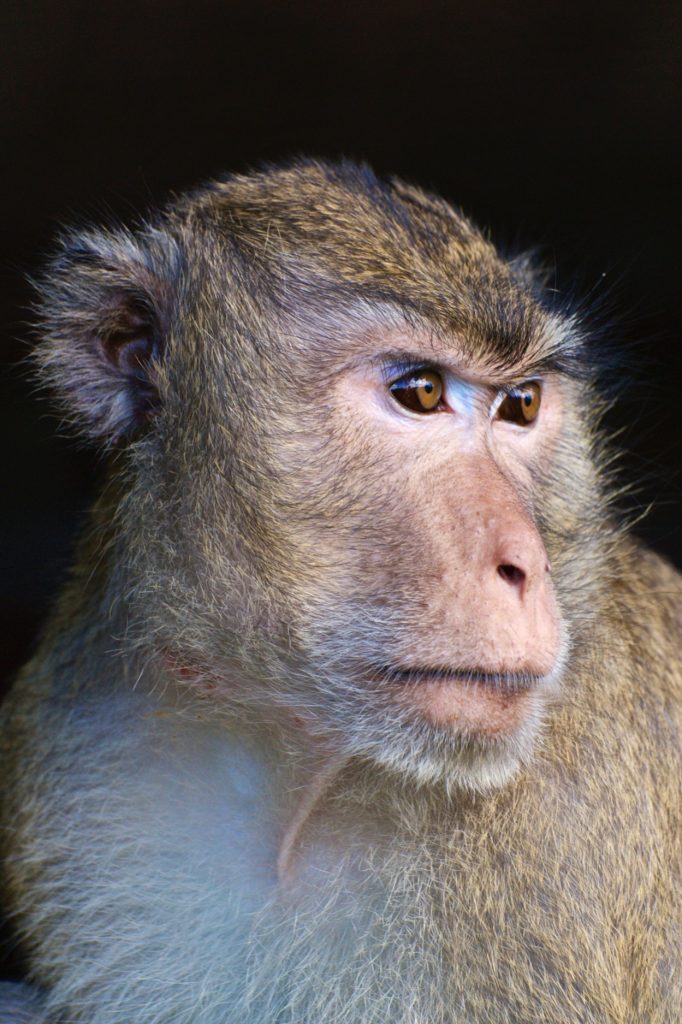 This rather thoughtful looking Rhesus Macaque was part of a troop of monkeys that inhabit the surroundings of the Angkor Wat temple complex in Cambodia. They are very tolerant of humans, and the more inquisitive of them can get very close! They can also be very acquisitive when the mood takes them – thieving gits! It pays to make sure that your camera gear is firmly attached to your body with a strap!

The day was quite overcast after a rainstorm, as the monsoon was running a bit late and we were still getting rained on every day. It gave the complex a freshly washed, very green, yet quite moody countenance. Very SE Asian, very ‘Apocalypse Now’. This being my second day there, I had more temple shots than I could shake a stick at (almost exclusively crap, as it turned out), so I decided to go and explore some of the surrounding forest on my tod. Adventure beckoned!

As I wandered into the trees, I almost immediately came across a Rhesus Macaque family group lounging around, looking cool, and this guy was the coolest. He was on a low branch about 1.7m away, and had no problems with the nosey tourist sticking a telephoto lens in his face. He just sat there, all alpha male, disdainfully checking out the tourist, looking for opportunities to filch some food or ‘shiny things’.

If you look really close, you can just make out the western aspect of Angkor Wat reflected in his eyes. The temple silhouette is very distinctive (so much so that the Cambodians put it on their national flag).

I took several shots of this guy, mostly with him looking straight down the camera lens, in the classic portrait style, but this is my favourite – altogether more thoughtful and coy. And those eyes…

What do you think?